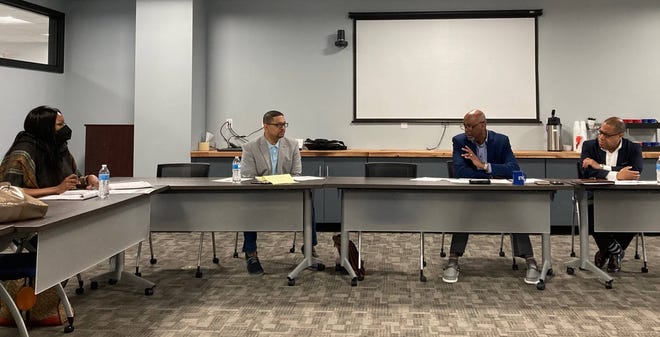 The Adams County Council of Commissioners met in regular session on August 2, 2021 at the Government Center in the presence of the following members: Diane Ward, Barbara Moore and Ty Pell. The meeting was opened by President Ward and opened with prayer and the pledge of allegiance led by Commissioner Ward. The administrator of the Court of Common Pleas, Veronica Grooms, was present at the meeting.

Moved by Barbara Moore and seconded by Diane Ward to approve the minutes. Vote: okay.

Moved by Ty Pell and seconded by Barbara Moore to approve the bills to pay. Vote: okay.

Moved by Diane Ward and seconded by Ty Pell to approve the transfer of funds. Vote: okay.

Holly Johnson, Director of Economic Development, met with the Board of Directors to discuss the following issues: Fund reports on the state of the abandoned gas station clean-up; Expiration of the federal moratorium on evictions; Project to resurface the parking lot of the old prison; opportunities to relaunch the ODOT canton; ARC Broadband Environmental Project Update; National road 41 sewer project; RFQ / Adams Lake Visitor Center Project.

Court administrator Veronica Grooms has asked commissioners for permission from court employees to use alternate courthouse access due to an increase in COVID cases in Adams County. The discussion focused on Supreme Court courthouse security guidelines, installing key code access, expenses to replace locks and keys, and public attempts to access unsecured entrances. . Commissioner Moore said it was a waste of public funds to replace the locks again.

A teleconference was held with John Lancione, of the Lancione law firm, to discuss the proposed opioid settlement plan and the deadlines for submitting documentation.

DPE director Holly Johnson spoke with commissioners about damage to personal property that had been left on county property. Courthouse security according to Supreme Court guidelines and employee access were also discussed.

Moved by Diane Ward and seconded by Barbara Moore to approve the Addendum to the Ohio Department of Rehabilitation and Correctional Justice Incentive Grant (JRIG) as presented by Chelsea Blevins. Vote: okay.

It was moved by Ty Pell and seconded by Barbara Moore to approve the task order two IFE Cost Analysis for Airport Improvement Program Project Grant # 3-39-0112-012-2021 at Alexander Salamon Airport and to authorize President Ward to sign on behalf of the county. Vote: okay.

Moved by Ty Pell and seconded by Diane Ward to impose an additional tax levy on November 2, 2021 for the support of Adams County children’s services and the care and placement of children, including Wilson Children’s Home in the amount of 1.0 thousandth for a period of five years. Vote: okay.

Moved by Ty Pell and seconded by Diane Ward to impose a renewal fee on November 2, 2021 for the running expenses of the Adams County Public Library in the amount of 1.0 thousandth for a period of ten years. Vote: okay.

Phil Dysard, Account Manager, Palmer Energy Company, met with the Board of Directors to discuss the renewal of the power supplier’s consultant agreement and the CCAO solar project.

Moved by Diane Ward and seconded by Ty Pell to appoint the Association of County Commissioners of the Ohio Service Corporation and Palmer Energy as the sole agent to view and secure information on electric power prices for county buildings. This does not authorize Palmer Energy to sign power supply agreements on our behalf. Vote: okay.

The Office of Budgetary Management has completed the public consultation period for the ARP funding program. Final guidelines for the disbursement of funds will be presented in mid-August.

Nancy Stranahan, Executive Director, ARC of Appalachia, along with David and Kim Baker, landowners, met with the Board of Directors to discuss the proposed projects and approval of the 2021 Clean Ohio Conservation Funds request for acquisition. of properties in the canton of Meigs. The CRA would like to acquire a 6 acre strip of road frontage adjacent to the Kamama Prairie Preserve to support public access to the prairie. Discussion revolved around the 97-acre Quiverheart reserve project and concerns about removing additional property from the tax base. A PILOT agreement was discussed and the project was tabled until further information was received.

Moved by Ty Pell and seconded by Barbara Moore to pass a resolution to allow the Appalachian ARC to proceed with the 2021 Clean Ohio Conservation Funds request for the proposed acquisition of a 6 acre parcel of property. adjacent to Kamama Prairie Preserve. , Township of Meigs.

Commissioner Moore said this would prevent the prairie from being landlocked and allow public access to the reserve. Commissioner Ward said she could not vote for a resolution because the grant provides for the purchase of a property with government funding, resulting in the loss of the property tax revenue base as the CRA des Appalaches is tax exempt. Vote: Ward- no, Pellaye, Moore, yes.

A teleconference was held with Sylvia Lieb, who is concerned about inappropriate language on signage and flags in Adams County. Commissioners understand that signs / flags are displayed on private property, but disapprove of obscene language along public rights-of-way. We encourage our citizens to consider the negative impact that language has on our impressionable young people and those who travel to our beautiful county.

Jason Buda, Mayor of West Union Village and Danni Studebaker, Deputy Chief, West Union EMS, met with commissioners to discuss the county contract with the village and request increased funding. The shrinking tax base and lost revenue after the DP&L factories closed were also discussed, along with county covered shipping expenses and CARES Act funding that were not used by the government. town. Adams County EMS Deputy Chief Adam Dozier was also present at the meeting.

Moved by Diane Ward and seconded by Ty Pell to approve an agreement between the Adams County Department of Employment and Family Services and Walmart for the Return to Home Clothing and Supplies program. COVID PRC school, as recommended by Principal Angela Richmond. Vote: okay.

Moved by Barbara Moore and seconded by Diane Ward to adjourn